Having a baby can be a pretty nerve-wrecking experience for a couple, what with a woman having to carry a human-being in their womb for nine months and the inevitable pain of childbirth, to the many restless nights being kept awake by a newborn’s crying through diaper changes and bottle-feeding. And in light of that fact, a local TikTok star and cosmetics entrepreneur has decided to reward her husband with a token of her appreciation ahead of her confinement period for the many sleepless nights he would surely have to experience while taking care of her and their baby.

In a now viral video clip that was uploaded by TikTok user @ayunieso24, also known as Anes Ayuni Osman, she took to documenting the moment when she had brought her 20-year-old husband to a luxury sportscar dealership near Damansara Perdana. Blindfolding him with his own face mask, she led him by the arm into the dealership, much to his confusion.

But all was revealed in the very moment when she removed his blindfold for him and presented her husband with an incredibly striking turquoise blue Lamborghini Huracan EVO, which can retail for upwards of RM2 million depending on the specifications.

Stunned by the spectacle, Osman’s husband broke down in tears before embracing her in a tight hug.

In speaking with Malay lifestyle daily mStar, Osman explained that she and her husband had both been incredibly blessed since they had tied the knot, and praised her husband for his attentiveness while taking care of her during her pregnancy.

“Asides from showing my appreciation for his sacrifices, I have gifted him this Lamborghini as I had wanted to keep him by my side throughout my confinement,” the young mother, who is due to give birth later this month, explains.

Will be spending 100 days in confinement

According to her, she and her husband will both be returning to her hometown of Pasir Mas in Kelantan to observe her confinement period, which will last a total of 100 days.

“I gave him the gift ahead of time, as I wouldn’t be able to travel far once I’ve started my confinement period.

According to the traditions practiced by my family in Kelantan, my confinement period will last 100 days. Which means my husband would have to stay with me in my family’s village for upwards of 3 months,” she said.

She also goes to explain that there is a high chance that she may have to undergo a Cesarean birth during this pregnancy.

“I don’t expect him to be by my side all the time, as he will still have to care for the baby night and day. But it is likely that I will be undergoing a Cesarean birth.

Mothers will surely know how painful Cesarean births are, so I’m expecting him to be extra attentive.”

Expects her husband to deal with all the diaper changes

Her husband is also expected to change their baby’s diapers and the mess that comes with it, but she claims that he has grown accustomed to it as he had been cleaning out the cat litter this entire time to begin with.

“He also stays late at night, as his business mind works better in the night dealing with marketing.

He has never slept till dawn. He’s only worried that if he stays up throughout the night and sleeps during the day, our child would only kick-up a fuss during the daytime. But I suppose I can wake him up if that happens.”

As one can expect, her video has since racked up over 1 million views over TikTok under 24 hours. But Osman is no stranger to going viral, as she had previously caught the eye of the media for spending RM50,000 on new diaper bags at Louis Vuitton, as well as getting her husband to buy her a Lamborghini Aventador SV as she was craving for one during her first pregnancy. As we all know by now, multiple states in West Malaysia have been affected by the flash floods…
byChee Wong
2 shares
2
0
0
No comments

Take note, parents! You can now apply for a child car seat subsidy from the government starting this month! When it comes down to taking a ride on public transport, common courtesy is key to ensure that…
byChee Wong
1 share
1
0
0
No comments 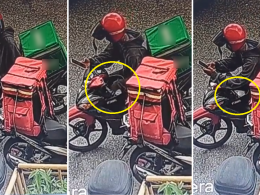 Given the current economic slowdown and rising cost of living, many of us Malaysians are beginning to feel…
byChee Wong
12 shares
12
0
0
No comments