A long-standing feature of Kuala Lumpur, the idyllic parcel of prime land known famously as Kampung Baru or ‘New Village’, has famously stood resilient against the face of steady urbanisation that the city has experienced over the years. Gazetted during 1900 by the British in order to allow the native Malay community to preserve their way of life in the capital, the settlement continues to be home to some of the best examples of local architecture and indeed, traditional Malaysian hospitality by ways of food and drink according to CNN.

But despite the village’s renowned tenacity for remaining fiercely opposed to gentrification given it’s strategic location within Kuala Lumpur, potential plans by the government to reclaim Kampung Baru for future development have come to a head after residents expressed their dismay at receiving only a small compensation in exchange for their homes.

According to Sinar Harian, the redevelopment plans involved homeowners who were living on private plots, as well as those who were currently occupying Selangor State Development Corporation (PKNS) flats. As many as 70% have already agreed on the terms to vacate their units, but the remaining 30% have remained staunch in their decision to stay on due to the meagre compensation they have received in offer.

In speaking to the Malay newspaper, 63-year-old Zalaha Yusof, a resident in one of the units that have been slated for redevelopment, explains that the compensation offer of about RM250,000 made it incredibly difficult for she and her siblings, aged between 45 to 68 years old, to find a new place to stay.

“We have been residents of this area since before it was even developed. We were then offered a lease on the unit, which we eventually came to pay off completely. It isn’t easy to be able to afford a place like this, and yet now we have been instructed to move,”

“How are we supposed to find a new home with only RM250,000 in compensation? Maybe on the outskirts of the city, but that would make traveling to the hospital challenging,” she said.

It is understood that residents of the public flats have received a valuation of between RM200,000 to RM250,000. Residents who had refused to sign off on the vacation notice were said to have been served a notice of investigation under Form F, Land Acquisition Act 1960 last August.

Saiful Azhar Ibrahim, a resident living on a private plot of land in Kampung Baru, expresses similar concerns that his own home may also be undervalued just like those living in the PKNS flats.

“Many of the homeowners have renovated their homes to feature two or even three floors. If we receive a compensation of less than RM500,000, where are we to go?” he lamented.

However, FMT reports that newly appointed Federal Territories minister Shahidan Kassim has since dismissed the claims that the residents had only received RM250,000 in compensation for vacating their units. He mentions that the actual compensated figure will only be revealed during discussions between the residents and the developer.

“The information being passed around is incorrect. They will be compensated more.”

“If the residents are not satisfied with the amount, they can meet me instead of talking about this issue on social media. That won’t solve the problem.” he said. Over the past weekend, a number of states across West Malaysia have witnessed chaos and devastation after a…
byChee Wong 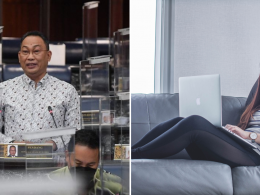 Over the period of the past two years, one of the realities that many office workers have come…
byChee Wong
8 shares
8
0
0