Have you ever wondered who would attend your funeral after you pass away? Those first come to mind are probably family and friends, maybe some others that you have not met in a long time. However, this elderly man who has just died at 87 years old in Liaoning, China received an odd appearance of an unexpected guest at his funeral. The guest was none other than a red-crowned crane.

A surprising guest showed up at the wake

A video of a crane warily walking into a mourning hall has attracted many Chinese netizens’ attention. Although the wild bird acted calm, it was a bizarre sight for the deceased’s family and friends to witness.

In the video, the crane was seen slowly approaching the mourning hall, and even waited in line to pay its respect. It queued behind a man who had arrived first like a respectful visitor.

When it was its turn, the wild bird strode towards the coffin and surprised everyone when it bowed in front of the altar.

According to the bereaved son-in-law, they did not chase the wild bird away but instead treated it with the same amount of respect. They provided corn, vegetables and live fish for the unexpected guest as a gesture of appreciation for its attendance.

He furthermore added that the crane walked into the deceased man’s room on its own after paying its respect. It then stayed there for a while until it flew away after around 4 pm.

Although many countries view the crane as a common wild bird, it is actually a symbol of longevity and peace in Chinese mythology. It is considered the second most favoured bird symbol by the Chinese, after the phoenix.

Moreover, the crane was considered a bridge to the afterlife because many believed that it carries the spirits to heaven. Due to this belief, the arrival of the bird was depicted as a good omen with some viewers believing that this was because of the deceased’s many good deeds.

To verify the authenticity of the animal in the video, the Panjin Forestry and Wetland Conservation Administration has chimed in and confirmed that the crane was in fact real. Apparently, Panjin is a habitat for cranes, and sometimes the residents even raised some themselves before releasing them into the wild.

However, the surprising visitor is not trained nor a paid actor because red-crowned cranes are first-class protected animals in China. It seems that the bird just really wanted to send the elderly man off on his final journey.

Also read: Netizen urges women to be careful at night after being attacked & bitten by men who catcalled her at Mont Kiara With four big blue stores across the country, a thriving e- commerce site and 25 years of living…
byNicholas
No comments 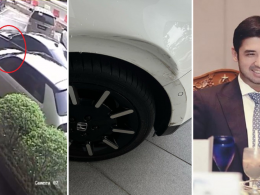 Although it is not considered a collision, many of us probably have experienced the feeling of frustration after…
byEunice
No comments Just last week, one of the most landmark verdicts in Malaysian courts was passed after disgraced former premier…
byChee Wong
13 shares
13
0
0
No comments