A gruesome discovery was made just yesterday (January 17th, 2023) when dismembered remains were found in a discarded suitcase along a local highway here.

As reported by local news portal Astro Awani, members of the public tipped off local authorities at around 11.45am late in the morning after stumbling across the suitcase next to the northbound stretch of the North-South Expressway at Kilometer 447 nearing the Rawang Selatan interchange.

Sources claim that the victim’s torso was found laying on the grass next to the suitcase as Harian Metro reports. Sungai Buloh police chief Shafa’aton Abu Bakar has since clarified that a head, arms and legs were later found in a black bag, reports BERNAMA.

“The victim’s identity remains unknown, given the condition of the corpse which was dismembered from the waist up and no identification documents were found at the scene,” he adds.

However, it is believed that the victim is likely a foreigner as Bacillus Calmette–Guérin (BCG) injection marks, which are typically seen on the arm of most Malaysian citizens as part of the Expanded Programme of Immunization (EPI) administered either at birth or in primary schools to inoculate against Tuberculosis, were not found on the body.

Murdered elsewhere before being disposed

Police believe that the victim was murdered in a separate location before the body was disposed along the highway. Further investigations at the scene have been carried out by both the Forensics Unit of the Selangor Police Contigent as well as the K9 Unit, reports Berita Harian.

The remains have since been brought to Sungai Buloh Hospital for an autopsy, and the case will be investigated under Section 302 of the Penal Code for murder. Members of the public with information pertinent to this case are urged to contact investigating officer Inspector A Aruneswaari at 012-6972996, or to visit their nearest police station. 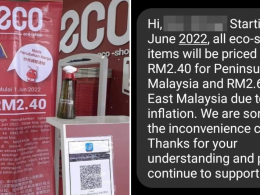 Given the generally damp economic climate that many of us Malaysians find ourselves in, it comes to no…
byChee Wong
No comments Public transport can be a boon for those of us who live within the city, if you’re looking…
byChee Wong
No comments

Fitting rooms allowed for states in Phase One, Two of National Recovery Plan

Customers of clothes, fashion and accessory shops, including at departmental stores in states under Phase One and Two…
byNicholas
No comments