For some of us, once a human passes on, their physical and spiritual beings are buried six feet underground and we can no longer see or touch them. For the rest of us, we believe that our loved ones come back once in a while in the form of spirits. This young boy and his mother’s visit to his grandfather’s grave turns into one where he ‘saw’ his dead grandfather somewhere near his grave.

Young boy points at trees and says “There, grandpa is there”

In a TikTok video uploaded by @Fhnaddd that has since been viewed over 500,000 times, the mother of a young child manages to document the somewhat eerie actions of her young child at his grandfather’s grave.

The video begins with the young boy pointing towards a plot of grass and some trees in front of him and then saying “Tu” (There). When the mother, who was behind the camera asks who he was referring to? The boy nonchalantly replied with a “Tok ayah” (Grandpa). Surprisingly, his mother, and the other man in the video were not surprised by the boy’s actions at all!

The man in the video who was standing behind the young boy even taught him to greet his tok ayah. The man says “Hi tok ayah}, while looking at the nothing that the boy was pointing at. The boy follows to do the same, with no fear.

The TikTok user captioned the video with “Not sure what he saw”. Netizens couldn’t help but react to this young boy’s supernatural encounter. Some point out that it might not be his grandfather that he was saying hi to, while others said that it is normal for someone who has passed to know when those alive pay them a visit, and they would appear. 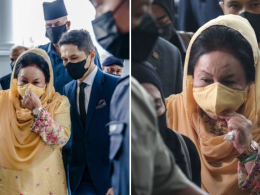 “I am a victim of all this,” Rosmah breaks down while addressing her bribery conviction at High Court As teenagers on the cusp of completing our Malaysian Education Certificate (SPM) examinations, many of us often remember…
byChee Wong
No comments