On Oct 29, Mark Zuckerberg’s announcement on the rebranding of Facebook Inc to Meta took the world by storm. During the announcement, Mark expressed the company’s ambitions to own the metaverse, a concept for a 3D version of the internet. While the world was busy buzzing about whether the Facebook app will also get a rebrand (no it will not), Malaysian entrepreneur Dato Anthony Cheng was in for a surprise.

On the day of Mark Zuckerberg’s announcement, Dato Anthony took to Facebook to share about his company, which happens to be Meta Group. Surprisingly enough, the brand name and logo on his Meta, shared great resemblance to that of Mark Zuckerberg’s Meta. The opening of his post read “Do you believe that there is coincidence in this work? Or…?”.

In his post, he shows how the newly rebranded Facebook Inc. name, Meta as well as its accompanying logo, bears a striking similarity to his own company’s. He follows to write that his company’s logo, which was designed three years ago, has a deeper meaning behind its simple demeanour. Cheng explains that his company’s infinity sign logo resembles the yin and yang energy.

To those who don’t already know, the concept of yin and yang is a Taoist concept that opposing forces complement each other to form a dynamic ecosystem. The use of the five colours within the infinity sign symbolizes the five elements (fire, water, wood, metal and earth) that “grow together endlessly”.

While the rebranding of Facebook to Meta signifies the global firm’s commitment towards the metaverse, Dato Anthony’s Meta has a traditional Chinese philosophy twist to it as it is said to resemble the origin and source of life, as well as the driving force for the enterprise’s success.

The entrepreneur jokes that Facebook probably consulted an expert for its rebranding. Thankfully, Dato Anthony has trademarked his logo when his company launched three years ago.

On Nov 3, Dato Anthony posted on his Facebook once again, this time poking fun at the recent Timah incident and whether his company will have the same fate. He wrote “Some say that changing your name is like changing your life”. What do you think?

Also read: Oh no! HaiDiLao is closing up to 300 restaurants globally due to poor performance Prime Minister Anwar Ibrahim has at long last announced the Cabinet line-up for his administration, ending a week’s…
byChee Wong
5 shares
5
0
0
No comments 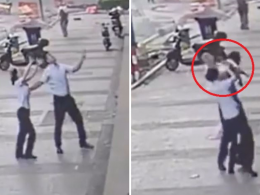 What will you do when you see that someone is in danger? Everyone may react differently when they…
byEunice
No comments