How much would you anticipate to pay for a hospital stay? That answer can range from anywhere between a few hundred, to a few thousand Ringgit. And understandably so, given the fact that healthcare in general can be a rather expensive affair, what with the cost of certain medical procedures, medication, and other related expenditures.

But for one Malaysian man, he was surprised that his wife’s hospital stay did not amount to an astronomical figure. On the contrary, he was only required to pay only a small sum after her 4-day. 3-night visit. In a Twitter post shared by netizen @amirulhanafy, he explained that he had brought his wife to Hospital Putrajaya earlier in March, after she suffered from a bout of dehydration.

She was then transferred to the Low-Risk Maternity Centre (PBBR) that operated under Hospital Putrajaya. Prior to being discharged, she had instructed her husband to pay for the hospital expenses incurred, which he did.

Assuming that the cost of her stay would amount to the hundreds, Amirul proceeded to withdraw RM400 from a nearby ATM. What’s more, he was prepared to make use of his debit card, just in case he didn’t have enough cash in-hand and had to resort to making an online payment to the hospital.

“I was so worried, I even started sweating.” he wrote.

However, to his surprise, the bill for his wife’s stay amounted to a partly RM17 for the duration of her admission. In a copy of the invoice that was issued to Amirul, an itemised breakdown shows the cost of what appears to be his wife’s bed amounting to RM3.00 for 4 days (RM12), in addition to a urine sample test conducted by the hospital’s pathology department costing RM5, which brings us to the grand sum of RM17.

Flabbergasted by the amount, he asked his wife if she had been receiving proper meals, to which she responded by saying she had, and was eating 5 meals a day. What’s more, she wasn’t lacking for care either as nurses would check in on her urine and overall condition every hour. Even she was left dumbfounded when she had learned of the cost of her hospital stay.

Still puzzled by the amount, Amirul then decided to speak to his colleagues on the matter and asked how much they would often have to pay, if their wives or children should end up warded in a public hospital.

“It depends. Sometimes, it wouldn’t go beyond RM10.” one of them told Amirul.

Saying that the experience had left a lasting impression on him, Amirul adds that he now has even more respect for the local healthcare system given how it has been able to provide affordable medical access to Malaysians.

“Prior to this, we have visited public health clinics before and paid only RM1 for every visit. We considered that to be cheap. But this time, my wife was warded for 4 days and 3 nights, complete with meals and nurses to check on her.

It’s true that the cost of our healthcare here is much cheaper in comparison to other countries. And while we may sometimes have to wait a little longer, it’s still worth it to receive the same kind of treatment and service, but without having to pay hundreds and thousands of Ringgit.” he said.

But of course, Amirul clarifies that he isn’t trying to suggest that all manner of public healthcare services are just as inexpensive, and notes that his case represents only what he and his wife have experienced first hand at Hospital Putrajaya.

Regardless of which, his post has since gone viral over social media, with many other netizens echoing his sentiments and sharing similarly positive experiences with the public healthcare system.

Also read: M’sian shares how a piece of dried bihun that pierced under her nail landed her in hospital 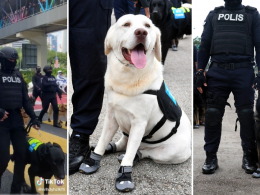 It goes without saying that when travelling abroad, the last thing you’d want to experience is being caught…
byChee Wong
1 share
1
0
0
No comments 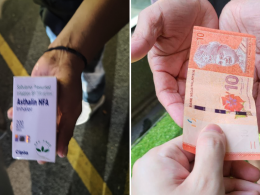 In the advent of increasingly prevalent incidents of crime, it comes as to no surprise that more and…
byChee Wong
No comments