The fact of the matter is, not every day can be a good day and there will be moments in life where things don’t necessarily go the way you expect them to. But in the case of one food delivery rider, his almost infectious sense of optimism in spite of a less-than-ideal day has delighted netizens across the country, proving that positivity is both an attitude and a state of mind.

Caught in a rainstorm, local netizen @jeffry_169 recently found himself stumbling across a food delivery rider who had his motorbike stopped ahead of his truck while they were both waiting at a stop light. Due to the downpour, a small puddle had begun to form along the roadway, causing many cars that were driving over it to kick up a splash.

Unfortunately for the food delivery rider, he found himself being repeatedly drenched with water as a number of cars and a lorry moved past due to his proximity to the main road. And yet instead of reacting with annoyance or anger at his situation, the man decided to channel his energy into positivity and broke out into a little dance on his motorbike every time he was soaked with water.

The short, 20-second clip has since gone viral over social media, and has been viewed over 689,800 times. Many have gone on to applaud the man for keeping an optimistic spirit, while also sending him well-wishes.

“Abang Panda: I accept my circumstances.”

“Allahhu, may he be rewarded with many blessings. Aamiin. The way he entertains himself and keeps his spirits up, I really am so impressed.”

“He must really enjoy and is happy with his job.” 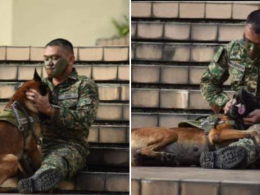 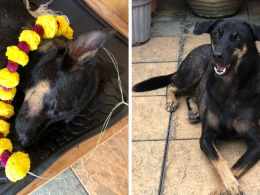 Come rain or shine, many of us pet owners are all the more eager to spend quality time…
byChee Wong
1 share
1
0
0
No comments 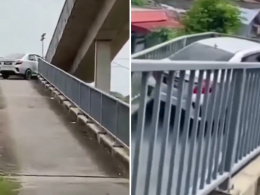 Malaysian roadways can be a pretty interesting, if not also incredibly stress-inducing, place to be in. From the…
byChee Wong
No comments